It is said that bats… are like love: nearly blind.
But if love is blind, shouldn’t a blind lover have a greater understanding of it?
So maybe bats are better lovers, and they have radar! It’s clear. Bats have it all.
Maybe that is why they fascinate me so much.

Combined with the fact that photographing them is challenging… made for a holiday which sole purpose was to photograph these loverboyz.

Hence last week Pieter-Jan and I spent a week in the French pyrenees, where we visited desman biologist Alain Bertrand. He is an old friend from our desman adventures and winter counts of bats. Also, he provided us with the right paperwork to photograph bats near their colonies. 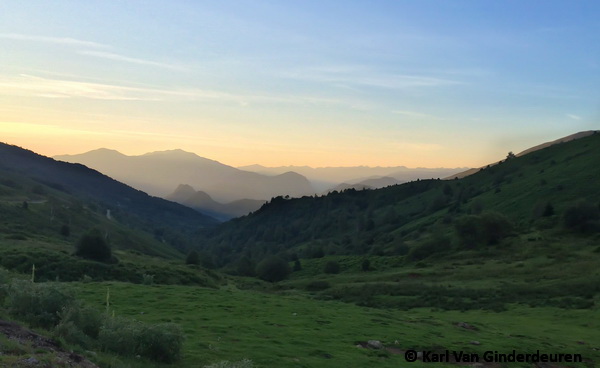 The landscape of the french Pyrenees: hills, lots of water and permanently green. 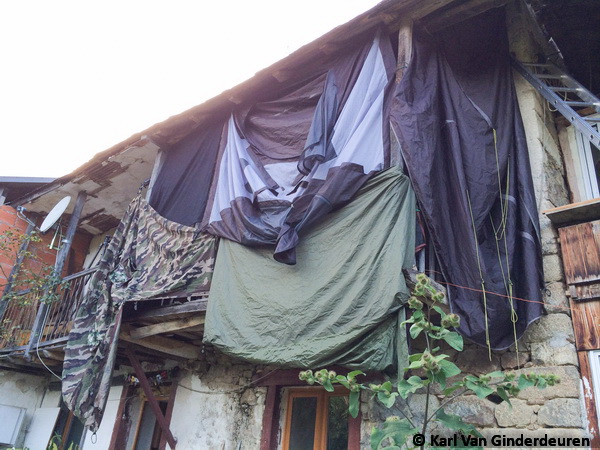 Some species we tried to photograph near a house, such as this effort in trying to guide Kuhls pipistrelles (Pipistrellus Kuhlii) through our infra red barrier. Which did not work 🙂 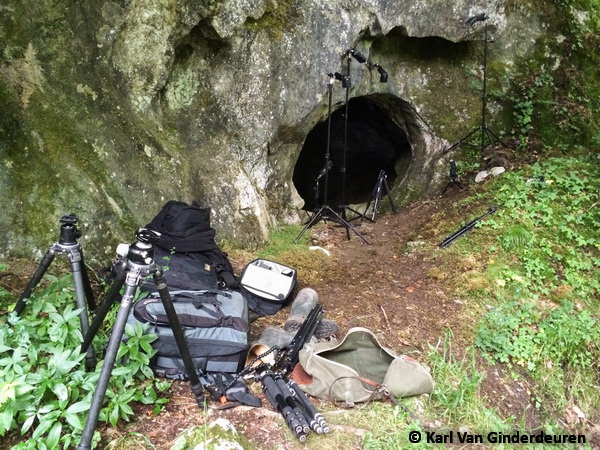 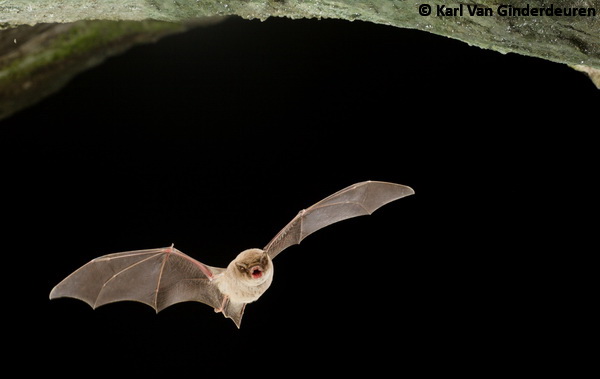 Lots and lots of gear: tripods, flashes and cameras. 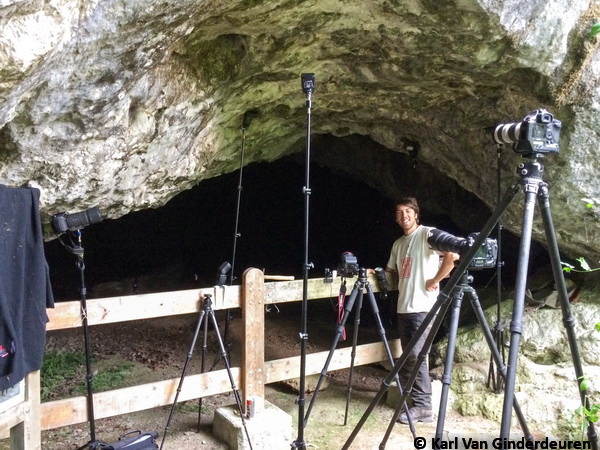 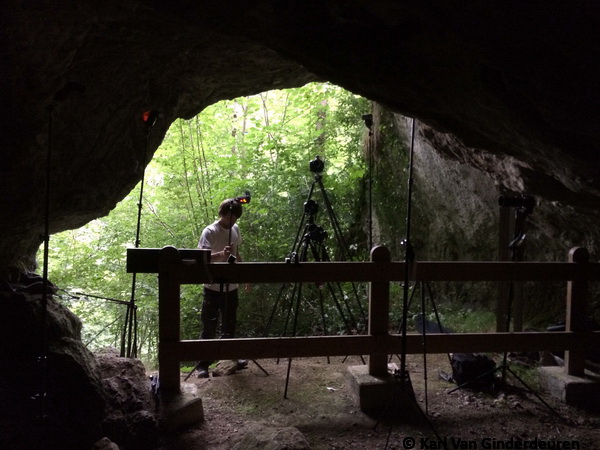 Gear ready at the entrance of a colony with > 3000 Schreiber’s bats. 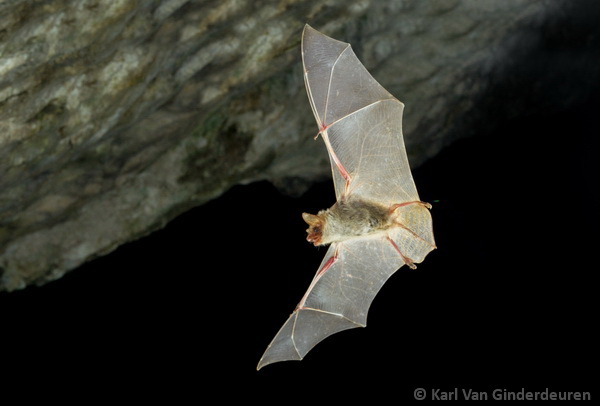 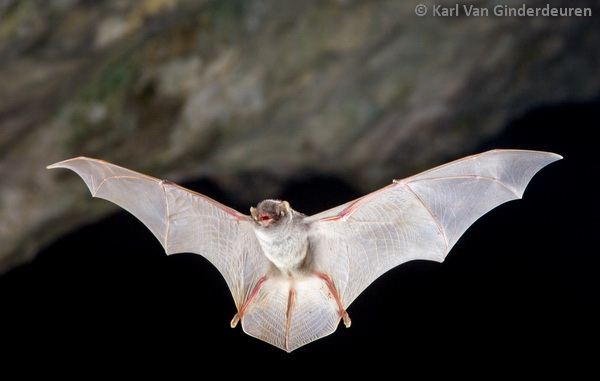 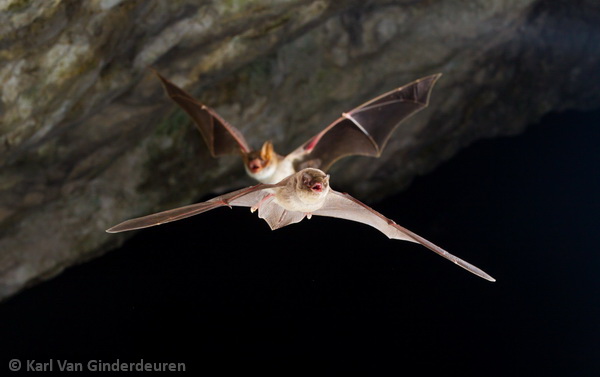 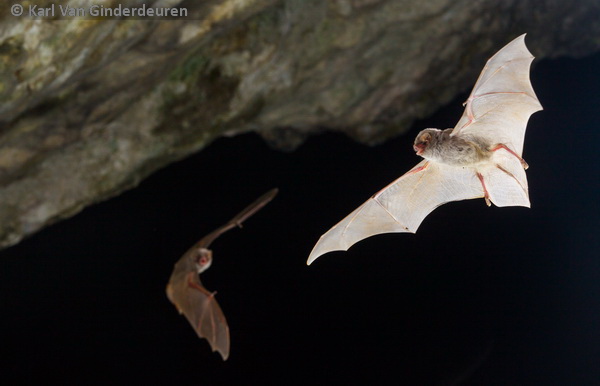 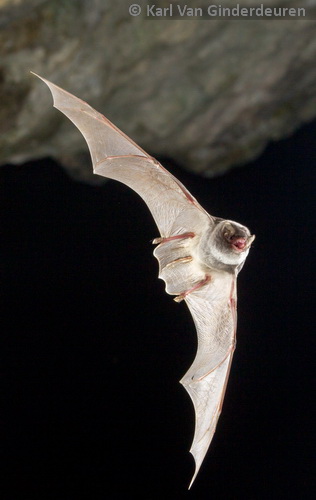 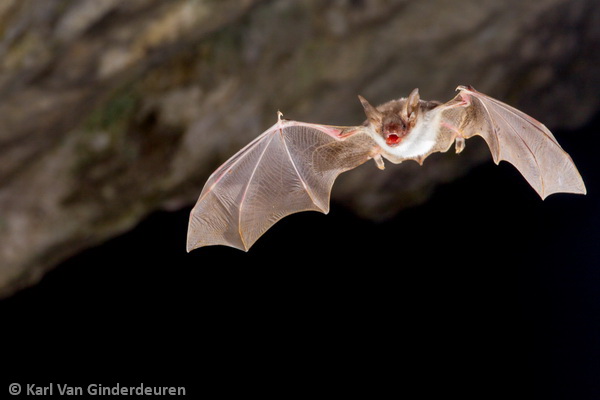 Because we had several cameras, we could start playing with wide angles, as well as with lateral perspectives. Following images were taken from a lateral point of view towards the barrier. 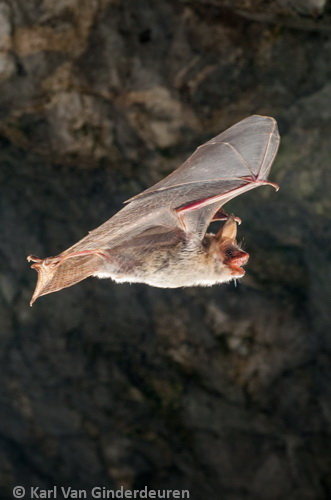 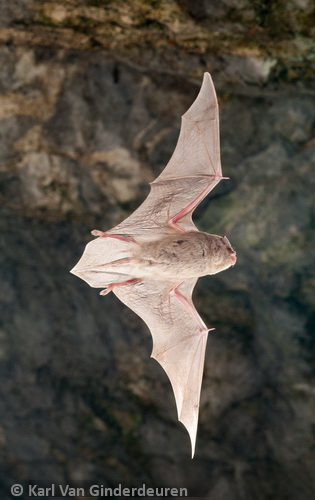 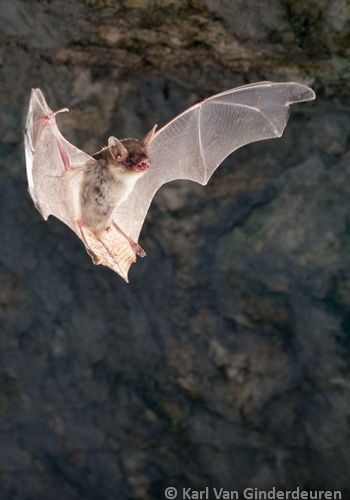 We even shot a collision between two bats: 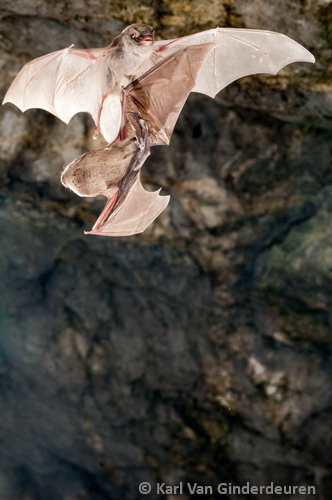 Mediterranean horseshoes (Rhinolophus euryale) were found in a cave with a very small exit. This made for wide angle opportunities: 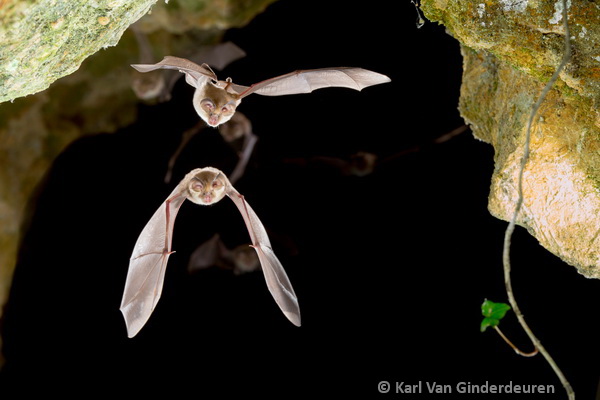 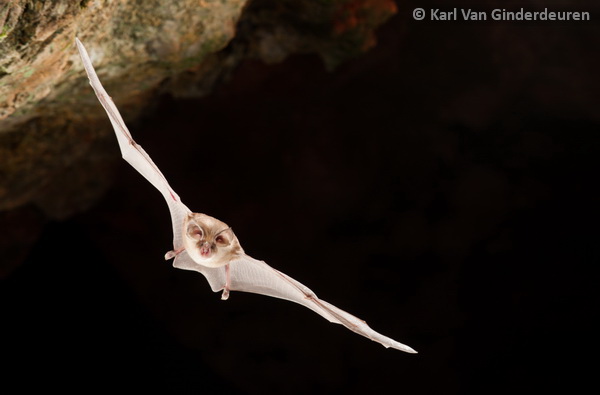 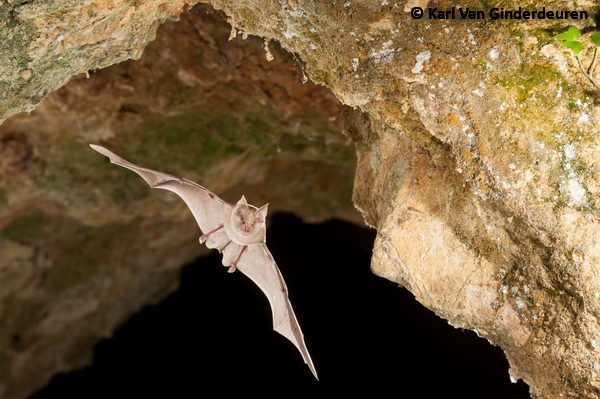 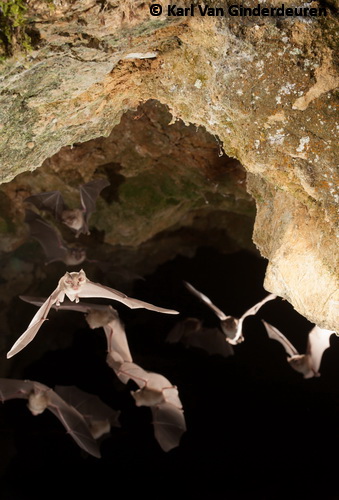 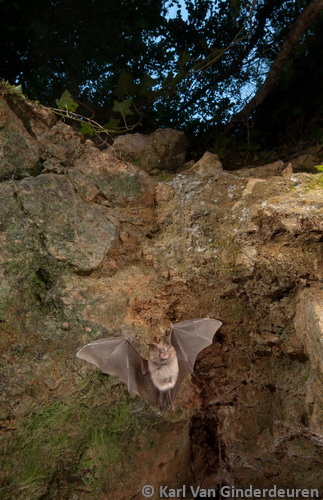 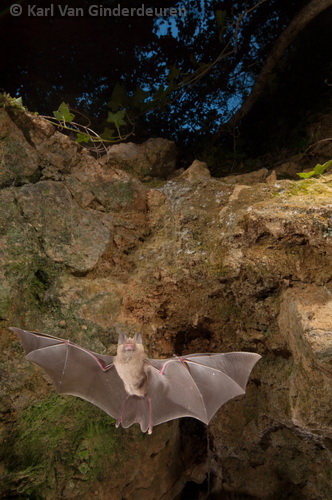 In the area are many hundreds of lesser horseshoe colonies. Not in any of the 3000 caves in Ariège, but on the attics and in cellars of old houses.

PJ and I found out that in Alain his house there was a little hatch used by lesser horseshoe bats (Rhinolophus hipposideros). We decided to climb the roof and attach all our gear with ropes. 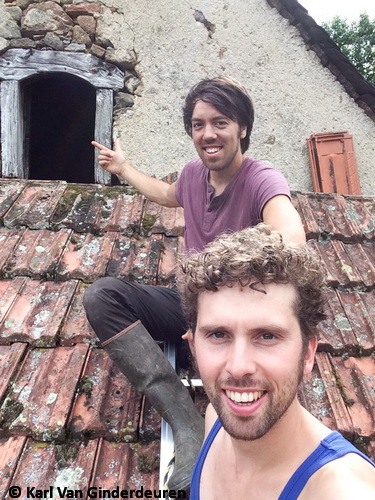 A picture of a black hole, I thought it was impossible… 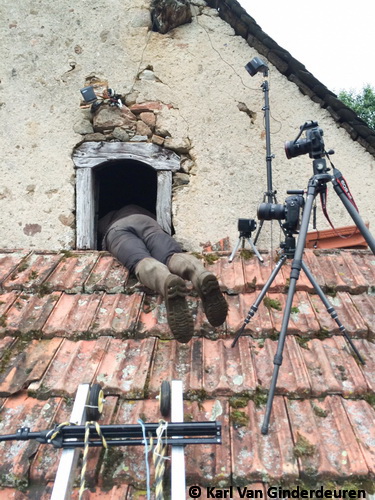 Quite scary, attaching your pricey gear to on an old roof.

But the results were nice. 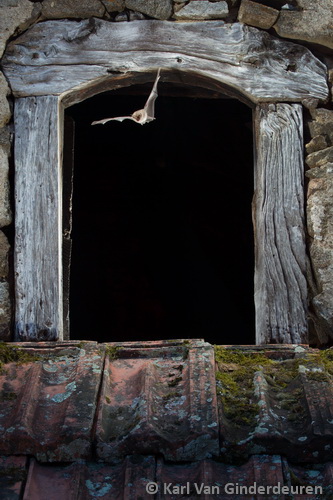 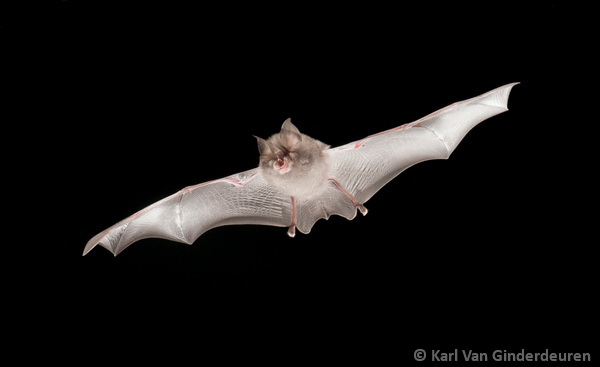 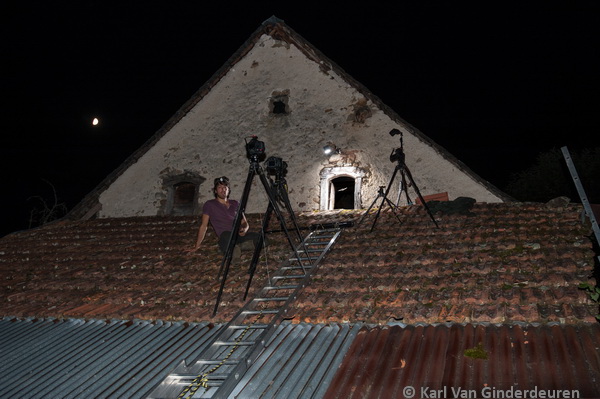 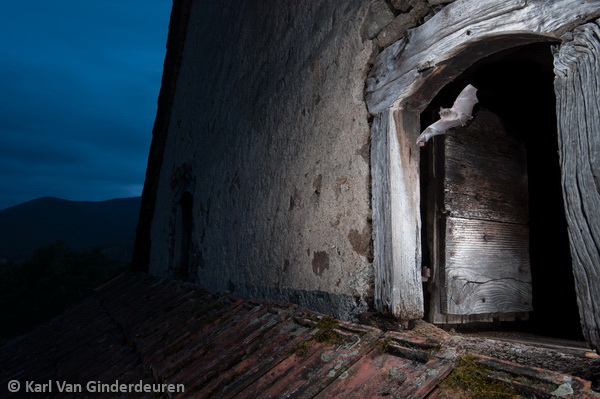 A big thanks to PJ and Alain, who made this trip a succes. Can’t wait to do more high speed.

People might wonder if this has a significant effect on the colony. Simply said: it doesn’t. We only photograph once at each colony and the animals don’t change their behavior. we never block the entrance so the animals can move freely.

So, what did we realy learn during a week with the night gliders? Is love really blind? Then what about the thousands of mother bats bearing offspring in the pitch dark colonies, where not a ray of light penetrates?
Maybe love isn’t blind… It just takes a lot of looking the other way.